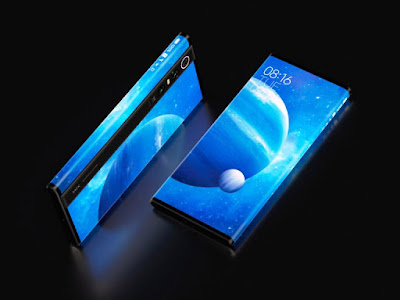 Xiaomi announced the launch of its innovative concept mobile Mi Mix Alpha which is made of almost screen with a thin strip of cameras at the back with a 180% screen-to-body ratio. This is really for the first time in the history of the smartphone, a concept has become a reality.
In the year 2016 Xiaomi was the first to introduce full-screen-display in the industry of smartphones which was then followed by even big players like Apple and Samsung, now it has become a common and essential part of every smartphone.
Xiaomi named it ‘Surround Display‘ with minimal bezels at the top and bottom. Mi Mix Alpha is equipped with 108Mp as the main camera with a resolution of 12032 x 9024 pixels (1.6μm). Apart from this Mi Mix Alpha has 20Mp Ultra-Wide-Angle and 12Mp telephoto camera with 2x optical zoom
Mi MIX Alpha is a 5G mobile powered by flagship-grade Snapdragon 855+ chipset. This mobile has 12Gb RAM and 512Gb internal memory (this will also be available in other variants as per market). The battery is 4050mAh with 40W fast charging.