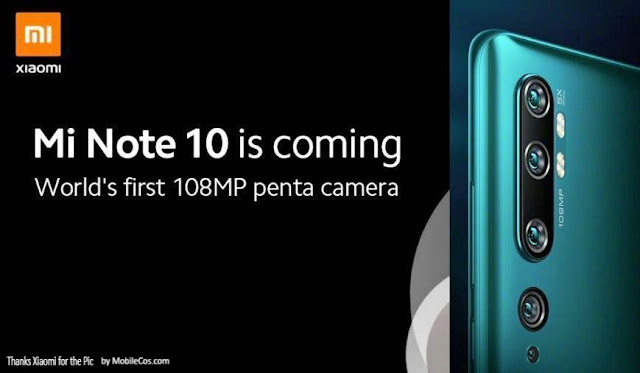 Xiaomi is launching Mi Note 10 with 108MP camera. It is said to be the world’s first smartphone with such a huge megapixel camera. It has 5 cameras at the back which is quite impressive if we leave those who are bothered with the growing number of cameras on a mobile phone.
Its teaser launched just a day after Xiaomi launched Mi CC9 Pro in China. It is believed that both the mobile phones are the same if we believe the leaks. Both the phones share the same 108MP camera at the back.
Mi Note 10 will be powered by Qualcomm Snapdragon 730, will run on OS Android 10 with a layer of MIUI 11.
As per the leaked report, its display size will be 6.4inch with AMOLED screen panel with at Dot Camera Notch in front. It is expected that battery capacity will be more than 4500mAh with 20W fast charger. Reversible Type-C connector is obvious.
Newly launched smartphones by Xiaomi in India are Redmi Note 8 and Redmi Note 8 Pro which can also be considered if we go for budget midrange smartphones.